Wyspiański PL 2020. A cycle of posters for ‘The Wedding’ by Stanisław Wyspiański

The cycle of presented posters is a visual commentary to fragments of The Wedding by Stanisław Wyspiański that refer more or less directly to Poland and Poles. Wyspiański grotesquely uplifted and patriotically ridiculed Polishness in The Wedding. Everything seethes there: Polish hussar wings with vodka, Polish eagles and swords, all things depicted as if in a state of drunkenness and, at the same time, looking alarmingly timeless and topical. The grotesque tone combined with patriotic images was a starting point for my visual interpretation of quotations.

The Polish motifs of The Wedding were also the subject of research in my thesis. Through the prism of these motifs and observation of their life in contemporary reality, I reflected on the condition of Polish visuality and Polish culture as a whole.

My poster and reflections are an attempt to approach the current notion of Polishness – a concept that is so indefinable.

After all:
All over the world
you can search for Poland, bride,
and you will not find it anywhere.

Homo viator (Latin: traveller, pilgrim) – the topos of a broadly understood journey, pilgrimage, man on the way. My piece was inspired by experiences and impressions from the journeys I took two and three years ago, when I travelled alone throughout Eastern countries. My pieces originally referred to those journeys, travelling, the route and space. In the course of time, they departed from their direct cause, eventually assuming the form of a story of the human being and the way of life in its broad sense. Focusing on the gesture, pose and suspended movement of the human body, I attempted to express wandering in itself that involves falls, uncertainty, hope or euphoria. 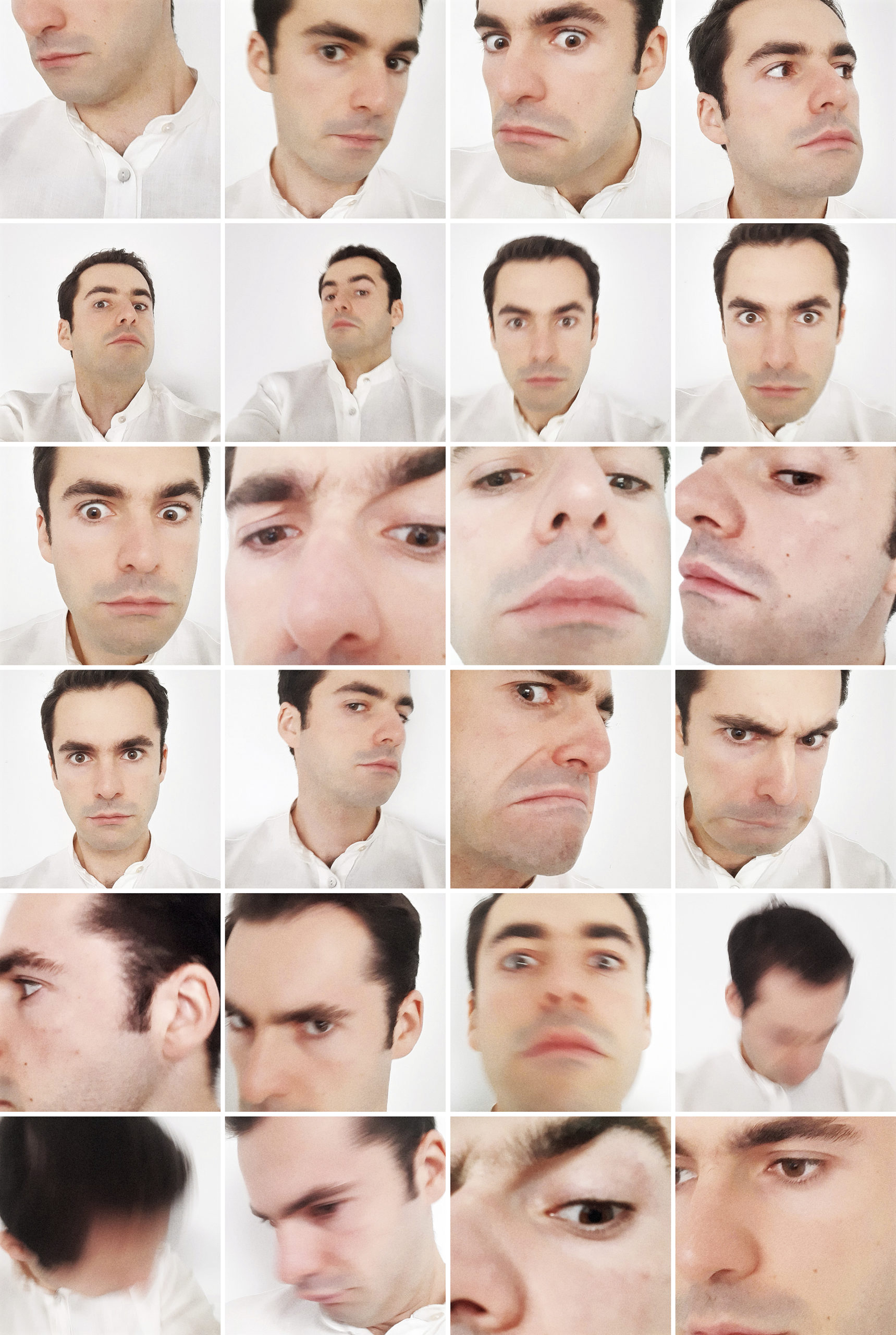 Born 1994. Studies: Faculty of Graphic Arts of the Academy of Fine Arts in Warsaw (2014–2019), Artes Liberales of the University of Warsaw (2019). Works in graphic design, artistic graphics, posters, drawings and photography. The head of the turboposter artistic group (2017–2019), the organiser of a poster competition and an exhibition with the Polish National Commission for UNESCO on the occasion of the World Day for Cultural Diversity for Dialogue and Development (2019). A participant in group exhibitions, e.g., Mois du graphisme, Echirolles (France, 2018); 26th International Poster Biennale in Warsaw (2018) and International Poster Biennale Lublin (2019). Prizes and awards, e.g. 3rd prize at the International Poster Competition We Want Jazz (2020). 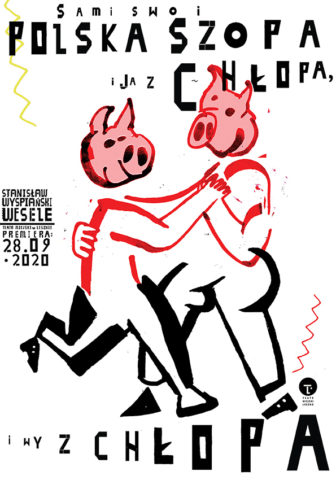 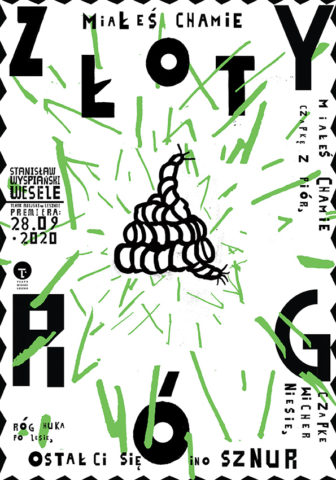 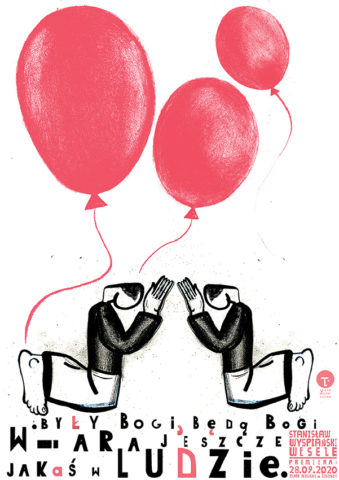 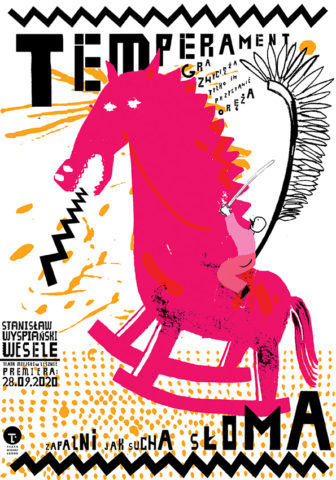 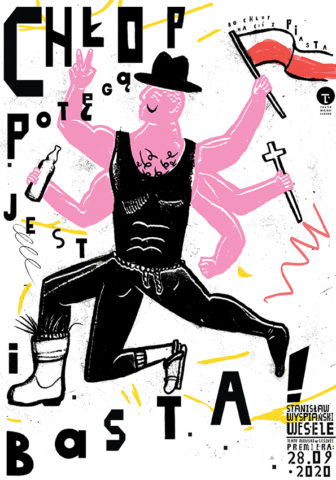 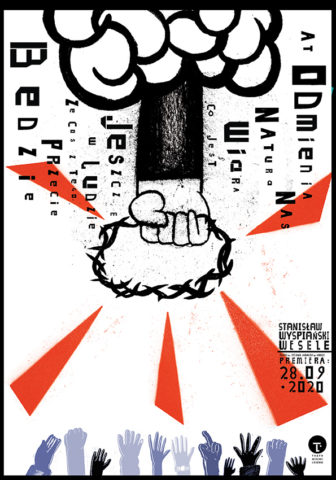 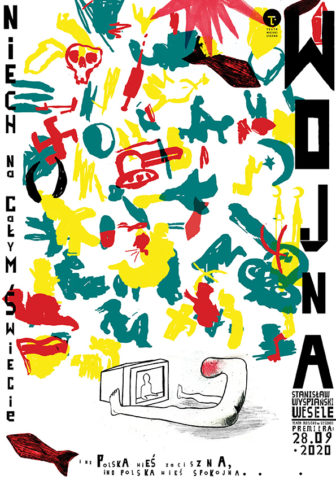 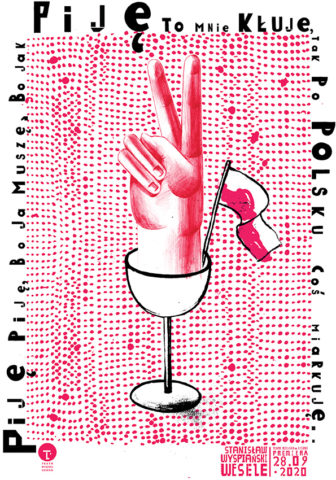 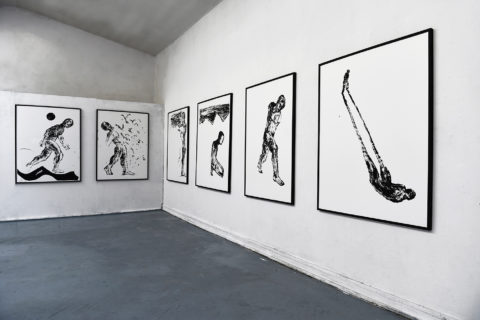 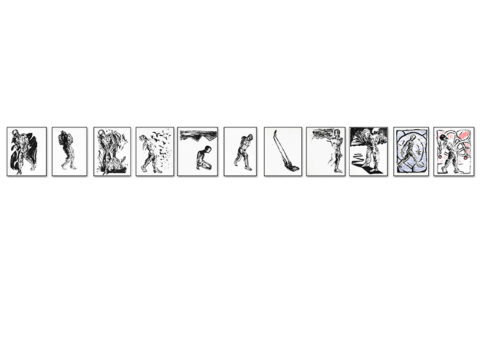 To find myself in art
Who am I and what is my art? Art is a theatre of visual senses. Thus, identifying with art, I too am a theatre. Grotesque, seriousness, sarcasm, wit. The right of choice and interpretation. And all contexts are subject to my emotions. I am an emotion myself – the emotion of my art. I think we should remember this when analysing Tomasz Stelmaski’s degree piece, minor degree, thesis and attitude.

After all, what is The Wedding by Stanisław Wyspiański today if not an emotional satire about national identity, flaws, vices, pride, folly, national greatnesses and national collapses?

In his ten works – posters based on quotations from the drama, which are often used also today – Tomasz Stelmaski helps us realise that the issues brought up in Wyspiański’s work are still valid today in every part of Poland. Through his work, he asks the question of the author of the drama: where is that Poland? Nowhere – these are only clichés.

The work was completed with fine visual taste. The relevant and wittily selected iconography, the freedom of drawing, typography and composition and a sense of grotesque humour prove the excellent talent and competence of the young artist. This work confirms Tomasz Stelmaski’s previous successes at competitions and exhibitions.

When starting to co-operate with Tomek Stelmaski on his minor degree, I did not know what result I should expect. The time of the pandemic from March 2020 has written new scenarios and has been completely unpredictable in the full sense of the word. In spite of everything, Tomek, an eternal rebel, made a positive and creative surprise with his new drawings. He did not lose enthusiasm for work even for a moment, and there was that special gleam in his eyes that expressed a sense of purpose and, consequently, fulfilment. As a cycle of large-format drawings, Homo viator was born of the need to affirm life. The author created a record resembling a poetic work filled with a mood that adequately reflects his quite specific preferences. Here we will find an expression of a manifesto suited to the author’s youth that is focused on overcoming difficulties and, primarily, numerous challenges that life sets for us in the multi-faceted sense of travel and travelling.